Ruter has experienced growth every year since its founding in 2008, both in the number of passengers and in the proportion of journeys compared with the private cars. 2020 appears to be an exception in this context, and the decline in the number of trips can be blamed on the corona pandemic.

Until the country closed down in March 2020, Ruter kept good pace towards reaching its targets for number of journeys and market share. In January and February, customer growth was good and the market share was high. However, the closure in March caused the conditions for travel to change completely overnight. For large parts of 2020, Ruter has encouraged people not to travel, and to avoid using public transport as much as possible if they have to travel.

Consequently, this has had a major impact on our traffic indicators, and growth and market share are therefore not an equally relevant measurement parameter for Ruter in 2020. Throughout 2020, however, Ruter has worked purposefully to safeguard the customer experience and the quality of our services. Therefore, Ruter has continued to prioritise offering good travel offers to ensure the mobility of pupils and students and people in critical societal functions, and that these trips should be carried out with good infection control. Ruter has been able to make a quick adjustment in a demanding situation, and has throughout the pandemic period also worked closely with other actors and public authorities to ensure infection control and good public transport services.

Although the corona situation has required major restructuring in the short term, Ruter has at the same time continued to work on the strategic plans to achieve long-term goals. Ruter’s strategic goals and Vision for the region is to develop Sustainable Mobility. Ruter’s definition of Sustainable Mobility is to facilitate a good life, social justice, good cities, regional development and enjoying life within the limits of what the Earth can tolerate.

Number of trips – fewer trips in Oslo and Akershus

Ruter has shown growth in passenger traffic every year since our start in 2008. In January and February 2020, customer growth was good and the market share was high. However, the closure in March caused travel conditions to change completely overnight. As a result, Ruter has had to encourage the population not to travel by public transport unless it is absolutely necessary, so the number of passengers in 2020 fell by 40%. In 2020, there were thus 240 million boardings on Ruter’s vehicles, which is 158 million fewer than in 2019.

In total, for all forms of mobility, 15% fewer trips were made in Oslo and Akershus in 2020 compared with 2019. This means that there have also been fewer people commuting by car. However, the number of car journeys has not fallen as massively as the number of public transport journeys, which means the car has increased its market share from 43% to 46% in Ruter’s operating zone. At the same time as the number of public transport journeys has fallen sharply, cycling and walking have fortunately strengthened during the year.

Decline for all means of transport

The decline in the total number of public transport journeys has been noticeable throughout Ruter’s network. The metro had 74 million boardings in 2020, which is a decrease of 38% from 119 million journeys in 2019.

The tram had the sharpest decline in 2020. A decrease of 58% was registered, from 53 million increases in 2019 to 22 million in 2020. The reasons why the tram has had a particularly strong decline is that extensive work is being done on the tram network around Majorstuen and Grünerløkka. In addition, the proportion of walking and cycling has increased sharply during the corona pandemic, especially in the city centre, where the impact area for the tram is by far the largest.

Number of trips in Oslo and Akershus

On the path to reaching ambitious sustainability goals

In 2020, Ruter continued its efforts to reduce emissions and ensure a transition to fossil-free and electric operations. Ruter took new steps to offer customers quiet and emission-free travel by bus and boat, in addition to trams and subways that run electrically. The goal is emission-free public transport in 2028, and by 2020 new contracts in our western district have been initiated with electric and fossil-free buses. The Nesodden ferries have been converted to fully-electric propulsion, with well-functioning charging infrastructures installed at Aker Brygge pier. 156 electric buses now run in Asker, Oslo and Romerike, for the benefit of customers and the environment. It has also been decided that there will be 109 new electric buses in our southern district when the new contract starts. This will provide almost 100 percent electrical supply to customers. A contract was also signed for new island boats at the beginning of 2020. These will be large, electric and universally-designed boats that customers can look forward.

During 2020, the corona pandemic and the call for the use of a home office have led to a particularly sharp reduction in the number of people travelling to work. The number of leisure trips has also been reduced, but not to the same extent as work journeys. A reduction in the number of work journeys has therefore also had a negative impact on the proportion of public transport journeys. At the same time, there has fortunately been a positive development in the number of journeys completed with other forms of green mobility such as cycling, electric scooters and walking. However, part of this growth comes from journeys that were previously carried out on public transport.

When society gradually moves to a time with fewer or no corona measures, it will be exciting to see to what extent an increased use of walking, cycling and home office will persist, whether many of the customers return to public transport, or whether we rather see that the increased market shares for cars remain the same when it becomes congested on the roads again.

We can expect to see significantly lower numbers of journeys when we are forced to encourage customers to choose other means of transport than public transport. This situation will persist as long as the population is subject to infection control restrictions that involve more home offices, fewer social activities and less use of public transport. One interesting question, however, is what the travel pattern will look like after the corona pandemic comes to an end. Ruter assumes that the number of journeys will pick up again, and over time that number will be higher than at the end of 2019. How fast this happens obviously depends on several factors, such as the degree of vaccination, general fear of infection, population growth, market share between cars and public transport, and the use of a home office. Ruter has worked throughout 2020 to offer predictable services under good infection control routines. There are many indications that this work has made Ruter well equipped to take back its market position when society reopens.

Ruter has strengthened its reputation

Ruter has actually improved its reputation in 2020 among the population compared to 2019 and previous years. This is a result of the organization’s achievements and that the number of public transport journeys has decreased at the same time, and market communication has largely been concentrated on corona-related messages. Ruter therefore leaves the year with a strong position in the population. It is also worth noting that this strengthening of our reputation in 2020 runs counter to the reputations of other transport companies.

There are several reasons for this positive development, but good follow-up of infection control measures, better space on board for remaining customers and the fact that Ruter has maintained a stable and reliable transport offer in everyday life filled with uncertainty can all be partial explanations. Throughout 2020, we have also measured how well the population believes Ruter has handled the corona situation. 90% say that Ruter has done this in an acceptable or better way. We also see the strengthening of our reputation reflected in a growth in the proportion of the population who are satisfied with the public transport services. Growth in satisfaction was noted in Oslo and Akershus, and customer satisfaction was at 77% at the end of 2020, 3 percentage points higher than in 2019 and above the target of 74% in 2020.

All in all, there are many indications that Ruter has a strong market position, which gives the organization a good starting point for regaining customers and market share. Together with the other green forms of mobility, which have grown in 2020, public transport will contribute to sustainable mobility taking new market shares in the years to come.

Much of the media coverage this year has been marked by public transport challenges related to the outbreak of the coronavirus. The analysis shows that we have been more proactive than before, responded to a record number of cases and reached out to many.

A total of 3678 media mentions about Ruter were published, an increase from 3282 in the previous year. This confirms the strong trend over the last four years, where Ruter has increased its visibility and reached out to many.

Public transport is defined as a critical societal function, and Ruter has taken on a coordinating role throughout the year among public transport operators by reaching out broadly with relevant messages. It is important for Ruter’s reputation that the company has handled the COVID-19 situation in a good way, for our travellers and key stakeholders, and in the media.

In the first phase, the media mentions were about the measures that were taken in public transport, changes in offered routes and not least travel advice. “Do not travel unless absolutely necessary” became a recurring theme, and we worked to get cases out in the media with different angles throughout the year. Ruter went out proactively a number of times to highlight weekend outings and leisure trips.

The need for financing public transport services was made visible in the media, and our CEO was a clear voice – nationally on behalf of the industry. The use of face masks became an important topic after the summer, as were school transport and constant repetition of travel advice. The bus strike demanded a new round of proactive communication, and in that connection criticism was also directed at top executive salaries in the industry.

There were a number of positive reports about the opening of the new tram line through Bjørvika, but there were also cases of criticism of the reorganization of the tram routes being offered.

Other topics in the media have been that Ruter sets stricter requirements for collision safety for buses, that the elderly-friendly bus service is attractive, mention about the electric operation of boats and buses, and cases about piloting self-driving buses. Ruter’s CEO Bernt Reitan Jenssen has also commented on home office, the possible benefits for society and how we can use the crisis to see opportunities.

Examples of negative publicity are mentions about wheelchair users who have experienced being left at stops, full school buses and ticket controls. 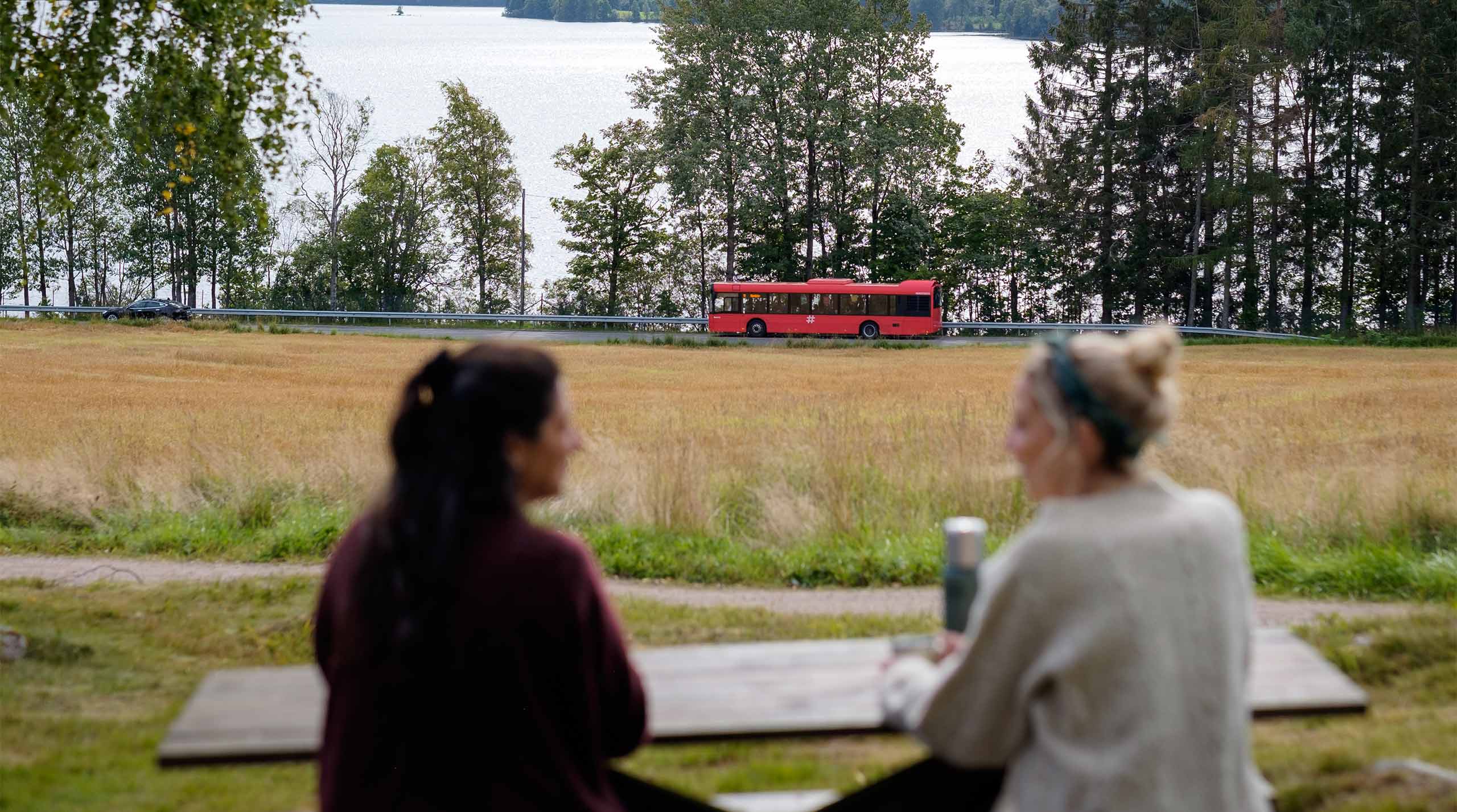